China, without doubt, is one of the greatest destinations in the world for food.

While just about every meal in China is a delicious adventure (sometimes full of surprises), there was this one particular chicken restaurant I ate at in Yangshuo, China, that I knew was going to be fantastic just from the looks of the outside (and from my cousin’s recommendation).

We started off by ordering 2 different types of chicken – both the restaurant specialties.

In China, you don’t want to buy a pre-butchered chicken, who knows how long it’s been sitting there? Instead most people in China prefer to go to the market, purchase a bird, and butcher it themselves.

And a restaurant is no different.

At this restaurant they won’t slaughter it until you order it – but once you do place your order, it takes just a few moments before it’s game over for Mr. chicken.

After the birds were butchered they were immediately dunked into a cauldron of boiling water in order to make the plucking of the feathers an easier task.

In no longer than 10 minutes after ordering, the squawking friend we had met upon entering the restaurant, emerged in an entirely different shape and form.

The first dish was chicken soup, a hot pot of the entire chicken chopped in pieces and drowned in a wonderful chickeny broth.

Though the boney bits of chicken weren’t exactly what I’d call “meat filled,” they were extremely flavorful. A bite of chicken paired with chili sauce and a bowl of rice and I was already feeling delighted.

Even better than the chicken soup was the wok full of chicken parts doused in oil and paired with an abundance of chillies.

It was the chicken version of the amazing shuizhuyu, a Chinese dish that stole my heart from the first bite. Basically the entirety of the chicken was chopped up into random bite sized pieces, fried up with chili sauce and served.

It may not look overly appealing, but I can assure you the flavor was wonderful (you’ll have to take my word for it)!

Stuffed full of about 8 bowls of rice and two kinds of deliciously fresh chicken, was when the restaurant owner himself delivered the final provisions of the meal…

Dessert was a pleasant bowl of strawberry pudding… haha yah right! – how about a fresh bowl of congealed chicken blood!

It sounds a lot worse than it tastes.

When you cook the blood it turns into a blood jelly without actually having much taste. The consistency was very smooth and it gave me that slight rubberiness between my teeth while I chewed.

The circle of life complete, I left the restaurant stuffed full of chicken and delightfully satisfied! 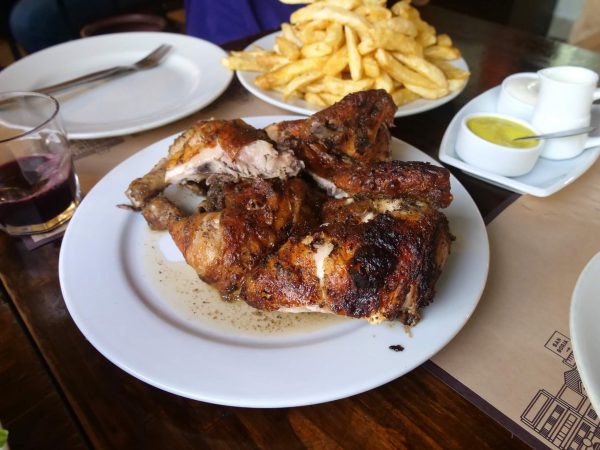