Mark’s Note: A shared affection for durian is a camaraderie that perhaps forms a stronger bond between two humans than anything else.

So after connecting with Lindsay and Rob, who have dedicated an entire year to travel the world and eat durian, I was pretty excited to hear about their adventures. In the future Lindsay will write a book, but for now be sure to check out their latest mouthwatering durian discoveries on Year of the Durian.

Now over to Lindsy…

Durian craze has hit with such force that some people are no longer content waiting for durian to be shipped to them.

Instead the wealthy of China, Singapore, Hong Kong, and Macau are beginning to include durian as part of their vacation packages, looking for tours of vintage farms and all-you-can-eat buffets.

Thailand and Malaysia make the most fuss about their durian, but the Philippine’s fun-loving, laid back culture and paradisiacal white sand beaches (not to mention durian!) makes the southern island of Mindanao a great durian vacation destination.

Here are a few family friendly durian activities in the Philippines:

A durian festival in disguise, Kadayawan is the harvest celebration that signals the beginning of durian season. It’s officially a gathering of the Davao region’s ten ethnic tribes, but durian plays a significant role in decoration and cuisine.

Around the city, restaurants put durian on the menu, mixing the fruit into a variety of popular local dishes and beverages. Not for vegetarians or the MSG wary.

Do: Watch for durian floats at the parade, fight the heat with durian ice candy, and taste durian offerings at the SM Mall food court.

An hour drive north of Davao City, the festival is now in its 7th year and has been a major success. The month-long event was created as a way to support farmers of the “Plant Now Pay Later” program, initiated to encourage durian farming.

No visit to Davao is complete without a trip to Magsaysay. Just outside of Chinatown, Magsaysay has been the durian center of Davao since the 1950’s.

The heaps of durian piled in front of Nenang’s stall attracts the most attention, but for a taste of the oldies head back across the street to Toto Willie’s, who has been selling durian since 1964. Beware the bicycle durian vendors, who offer lower prices but rig the scales.

Do: Try local favorites like Native, Arancillo and Puyat. In true local style, wash it all down with an iced bottle of Coca-Cola, believed to cleanse the palate and prevent durian burps. See Durian Varieties of the Philippines.

Do: Sip a durian beverage and munch a slice of durian cake while marveling at the company’s new jingle, set on repeat as only tolerated in the karaoke-obsessed Philippines.

The gateway to Mindanoa’s mother volcano, Mt. Apo, the city used to host one of the nation’s largest fruit festivals as well. Weather changes and a shift to rubber, banana and oil palm have decreased fruit production and the festival has been canceled since 2010.

Do: Enjoy the local durian supply between hikes, or attend the nearby Kalivungan Durian Festival instead.

This is where the paradisiacal island dream becomes reality. The sixty-minute ferry ride leaves from Santa Ana Wharf just next to Magsaysay Durian Park. Complete your durian vacation by grabbing a box of durians from any of the Magsaysay vendors before leaving. If you plan on staying awhile, you can place an order and have your favorite varieties shipped to you via ferry.

Do: Eat durian while relaxing on a white sand beach, feed durian to fish while snorkeling, or build a durian shell boat. 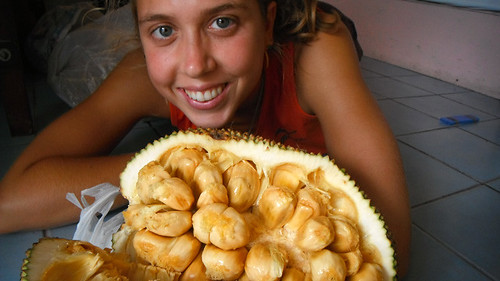 They have just four months and three countries left of a year-long project focused on the King of Fruit. To read about their adventures or satisfy your own durian obsession, head over to Year of the Durian now! 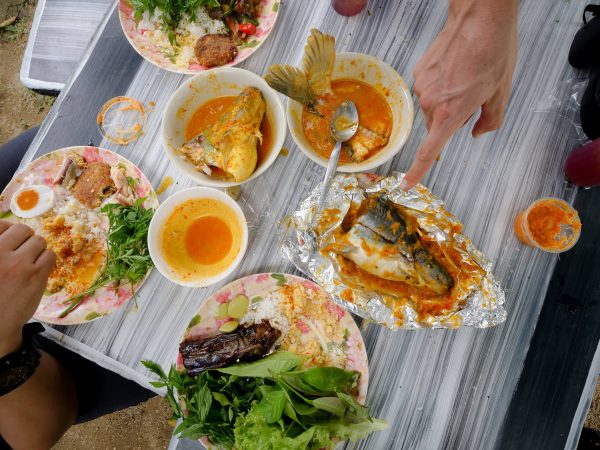