Happy New Year to you and your family and greetings from Thailand!

But since we’re obsessed with food, I thought I would do a little recap and share the 21 best meals I ate in 2014.

United States: This year, my wife Ying and I started in the US, where we spent some time visiting family in both Arizona and Hawaii.

Japan: From Hawaii, we flew to Japan, where we spent a couple weeks of wandering and eating as much as possible in Tokyo. I was blown away by the quality and care put into the food in Japan, and if I ever get a chance to return, I would love to explore more of the country.

England: From Japan, we returned home to Thailand, where we spent a month until taking a quick trip with to London for a Chowzter food event.

Thailand: From London we came back to Thailand, where we spent a few months, doing a number of freelance projects, including a rewarding and learning experience being the host of a Thai food TV show (BTW: we are done filming, but I’m still unsure where the show will air or how it will be distributed – but I’ll let you know if I find anything out).

Myanmar: Just a quick flight from Bangkok, Ying and I spent a few weeks in Yangon, Myanmar. I had been there about 3 years before, but it was good to return again and eat more delicious food.

Vietnam: Our final trip of the year was to Vietnam, and this trip was focused on Saigon (Ho Chi Minh City). I’m still in the process of gathering all my food photos and editing food videos, but lots more Vietnamese food from Saigon coming in the following months.

Ending 2014, Ying and I are traveling around northern Thailand (we’re in Nan at the moment), and I can’t wait to share some food and travel guides from around Thailand in the coming months.

All the meals listed here are pretty much in order of when I ate them, starting at the beginning of the year.

When I lived in Arizona going to University, probably my favorite thing to do in life was eat Mexican food.

So when I was back for a visit, along with my buddy Carlos, we headed to Los Reyes De La Torta, a restaurant we had frequented years ago, specializing in monstrous meat filled Mexican sandwiches.

Once again, it didn’t let us down.

In Hawaii, while I ate at some old favorites, my Aunt and Uncle introduced me to one of their longtime favorite plate lunch spots – St. Louis Drive In.

The food was simple, but just good local Hawaiian style.

Moving on to Tokyo – and what an incredible food experience it was.

After getting a recommendation to eat at Tenmatsu (and also something pretty cool, if you check out their website they included our video on the homepage!) from my friend Yukari, I knew I needed to check it out.

I had eaten tempura many times before, but never had I experienced this kind of quality and care.

Again, just like the tempura, I had eaten sukiyaki before outside of Japan, but it was the quality of the ingredients, the precision of the preparation, and the atmosphere that made this sukiyaki meal so delicious.

When it comes to the purest of all foods, for myself it just can’t beat fresh sashimi and sushi in Japan.

I’m a spicy kind of guy, and normally most of the food I love is extremely flavorful and pungent – I love things like raw garlic and chilies.

But if you take a single ingredient, without the need of any alteration or seasoning, it can’t get better than fresh sashimi.

This year Ying and I had the opportunity to dine at Narisawa, one of Tokyo’s world famous restaurants, rated one of the best in the world.

The entire meal experience, food and presentation, was outstanding. The Kobe beef, which was cooked by hot olive oil spooned over the meat, was so good, I almost fell out of my chair as I ate.

Thanks to Jeffrey from Chowzter.com, who knows the chef at Narisawa and who sponsored our meal.

Ying and I were in London for just a short trip, but we really enjoyed out time there, and one of our highlights was eating through London’s legendary market.

The duck confit sandwich at Le Marché du Quartier was one of my favorites, the duck was tender and melt-in-your-mouth rich.

For years now, one of my favorite restaurants for normal Thai rice and curry is a restaurant at Nang Loeng Market.

When I went there one day this year, I had their version of yam makua yao (ยำมะเขือยาว), which is roasted eggplant salad, which I got with a hard boiled egg.

It was so good, I had to get a re-fill immediately.

Of all the food in the world, there’s nothing I’m more passionate about than Thai food.

This year, for the first time, I ate at a restaurant in Bangkok called Soei, now one of my favorite restaurants in the city.

Everything is delicious, and the chef, P’Soei, prepares nothing but bold and flavorful dishes, which my taste buds can’t get enough of.

Khao soi is a famous northern Thai dish that’s kind of hit or miss for me; Sometimes it’s very good, other times it’s not my favorite (especially when it’s too sweet or oily).

The version at Khao Soi Khun Yai in Chiang Mai, was deliciously rich, and the curry was extremely flavorful.

I’ve since tried a few more khao soi versions throughout northern Thailand, which I’m excited to share with you soon.

If you ask someone from Yangon where to go to get a meal where you can choose any Burmese food you can imagine, it won’t take long before they recommend Feel Myanmar.

The restaurant is home to any and every type of Burmese dish you can imagine.

I went a little crazy ordering when I saw the vast display of curries available, and they were all good, especially the goat curry.

When I asked on a YouTube video where to eat in Yangon, one of the places many of you recommended was Minn Lan Restaurant, serving seafood dishes from the Rakhine state of Myanmar.

Freshwater prawns are one of the most delicious gifts to the world, ever.

Ayutthaya, about an hour drive from Bangkok, is famous for its freshwater prawns. This year, I had the chance to go to a restaurant called Ruay Goong Pao (ร้านรวยกุ้งเผา), where I had probably the best grilled freshwater prawns I’ve ever eaten.

If that wasn’t enough, after that stunning meal, I had the best tom yum goong I’ve ever had too. I’ll be writing more about that later.

Chiang Rai is a city in northern Thailand that I had wanted to visit for years. Finally, in 2014, Ying and I were able to spend some time there.

One of my favorite meals was at a restaurant that serves some amazing meat dishes, including steamed beef that tasted like the Thai version of a Sunday roast.

While in Chiang Rai, Ying and I rented a car and drove to a small Thai Yunnanese village in the mountains.

Our first stop was lunch at Im Pochana Restaurant (ร้านอิ่มโภชนา), where Ying and I chowed down a huge plate of tender excellent braised pork leg.

The food was good, and the mountain fresh air also contributed to having such a memorable meal.

Hor mok is a traditional central Thai dish, that’s a fish custard, steamed in a banana leaf. You’ll find it at many Thai restaurants, and I had eaten it many times before.

But this was by far the best version I’ve ever had, homemade, using all fresh ingredients, no sugar (so it wasn’t sweetened like it sometimes is these days), and it was packed with flavorful spices, and thick coconut cream.

It was unbelievably good, rich and creamy.

Nam ya kati is a southern Thai curry, made with deboned fish, curried in spices like turmeric and lemongrass, and usually served over kanom jeen rice noodles.

In the southern Thai province of Chumphon, I was able to eat an incredibly thick and rich nam ya kati with homemade kanom jeen noodles – a first for me. I can’t even begin to describe its deliciousness in words.

Note: The purple color of the rice noodles is from the addition of rice berry flour.

Before taking a trip this year to Vietnam, I had heard of, and eaten dishes like bun thit nuong and banh mi, but never had a I heard of or tried bun rieu, a crab based noodle soup.

I haven’t had a chance to write about it yet, but it’s coming soon, video too.

Hanging out with Kyle from Kyle Le Dot Net, one day in Saigon we headed a bit out of the city to eat at a restaurant known throughout the city for its delicious chao vit, or congee and duck.

Kyle did the ordering, and it turned out to be a duck feast that I won’t forget. I especially loved the herb salad, a nice Vietnamese touch to our meal.

Sea snails are one of the many incredibly popular meals to eat in Saigon, and when Ying and I visited, we had a number of feasts that included all sorts of different snails and shellfish, some of which I had no idea what I was eating.

Not only did I enjoy the snail dining experience, but I also loved the culture and atmosphere, like so many other meals in Vietnam.

Now we are in the end of 2014, and Ying and I have been doing a lot of traveling around Thailand.

While in Lampang, a city not too far from Chiang Mai, in northern Thailand, we ate lunch at Mae Hae, a local restaurant where Grandma serves northern Thai food.

I ate, what was probably the best gaeng hanglay, a northern Thai curry of pork in a tangy ginger and pickled garlic sauce, that I’ve ever had.

It’s been an incredibly rewarding year, thanks in a huge part to you – for watching our videos, for reading our blog posts, and for sharing them.

Thank you very much, I’m extremely blessed to have your support.

Also, I can’t thank my wife Ying enough. She’s often behind the scenes of Migrationology, yet she does so much, and she is truly a blessing to my life in every way.

Are you signed up for my newsletter?

In 2015 I will be sharing lots more delicious food and exclusive travel tips by e-mail. If you’re not already on it, just type in your e-mail, and click “I’m in!”

Thank you for reading this end of the year re-cap of meals.

I would love to hear from you too – what was your most memorable meal or delicious food of 2014!? 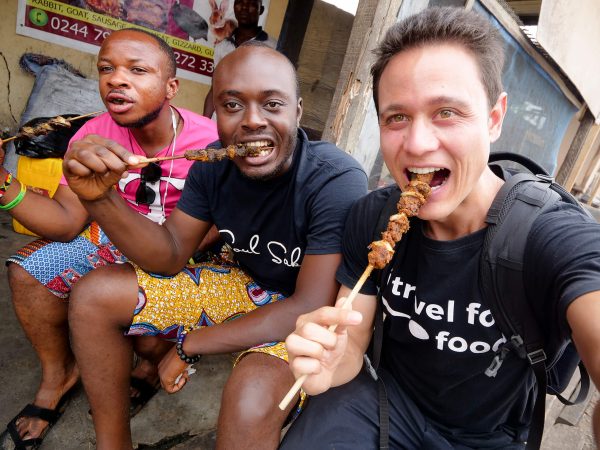