Cheated (But still Impressed) at the Taj Mahal

Probably the most famous attraction in all of India is the Taj Mahal.

Like the Egyptian pyramids in Cairo, just about everyone, whether they like to travel or not, wants to see the Taj Mahal in person at some point.

While traveling through North India en-route to Delhi, I was finally able to visit Agra, and check out this majestic structure.

Because I travel a lot, doesn’t mean I’m immune to being ripped off or cheated!

At 750 Rupees per person (for foreigners), entrance fee to the Taj Mahal doesn’t come cheap.

To purchase your ticket, you go to one of the ticket offices located outside of the gates, line up, and get your ticket. Along with your ticket you’ll get a map, shoe covers, and a bottle of water.

It wasn’t until hours later, when I was about to pay for dinner after spending hours at the Taj Mahal, when I noticed how I got cheated.

I was shorthanded change when I purchased our tickets… and not just by a few bucks, but by a full 500 Rupees ($9.26)!

Now it’s slightly possible that the ticket vendor made a mistake, but it’s more likely that the vendor shorthanded me on purpose and received a very nice tip for himself.

One of the reasons I presume this is because the same exact thing happened to me multiple times later at Delhi attractions like Qutub Minar. After paying for my ticket I was shorthanded change by a few hundred Rupees, and after counting my money, I went back to the ticket vendor who didn’t even say anything but just handed me the change I was supposed to get, while looking away (even if the ticket vendor succeeds 50% of the time, he’s making some serious tips).

Anyways, rather than focus on the negative, it’s a positive reminder that it’s OUR job to check if we’ve been given the correct change (don’t slack, like I did)!

I proceeded on through the tight security, and yes, I had to take that famous shot through the gate that everyone who visits the Taj Mahal takes.

Back over to the beauty of the Taj Mahal!

It was a busy weekend afternoon when I set foot into the Taj Mahal.

This white marble mausoleum was built by Shah Jahan, in memory of his wife – that’s the reason it’s so well known as a symbol of love.

The Taj Mahal is a masterpiece of Mughal Islamic architecture, a UNESCO World Heritage Site, and occasionally makes the top man-made wonder of the world lists.

After walking around the gardens, it was time to enter the mausoleum, which is where the shoe covers come into use. Since the Taj Mahal is made from marble, marking it up with rubber soles wouldn’t be a nice thing.

On the top deck of the Taj Mahal, it was again a photo snapping frenzy as everyone waited (or didn’t wait), their turn to get the perfect portrait with the famous structure in the background.

We entered the mausoleum, and actually it was so busy the day I went that I could see the tombs, but other than that it was just a large dark cave-like interior.

Despite the strictly no photo taking policy inside the tomb, hundreds of people were flashing their cameras and cell phones shamelessly.

Though we often see the view of the Taj Mahal form a distance, if you stop to notice the detail, you’ll also be amazed. The marble carved decorations are truly remarkable as well.

All the patterns and the geometric shapes on such a huge scale were amazing to see.

Here’s another shot of some of the details on the Taj Mahal, including some floral designs and colorful flowers.

On two sides of the Taj Mahal are mosques, huge and nicely designed structure as well. You can walk around them, but there’s not much to see apart from the far off view.

Here’s a video of my time at the Taj Mahal:

So, is the Taj Mahal worth visiting?

A huge yes, in my opinion!

Despite the hype (and the temporary horrible feeling of being ripped off) that the Taj Mahal receives, I really did think it was an amazing, mind blowing attraction to witness. The craftsmanship and the magnitude is unbelievable. I was almost in a dream the entire time I was there!

Have you seen the Taj Mahal, or would you like to? 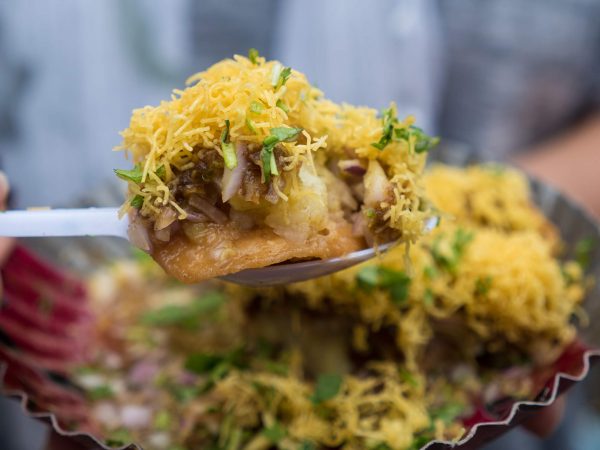