But perhaps if there’s one street food snack that could be considered the pillar of Mumbai street food, something people from all walks of life in Mumbai enjoy, it would be vada pav (another contender would be pav bhaji).

And if you’re looking for one of the best spots to eat vada pav in Mumbai, Ashok Vada Pav is a street food stall you don’t want to miss.

What is vada pav?

Really quickly, what exactly is a vada pav?

First of all, an aloo vada is a potato pakora (or potato cutlet), and a pav (or also known as pao) is an unsweetened bun / white roll. So the combination is a potato cutlet stuffed into a bun.

But when combined with seasonings, chilies, and most importantly chutney, it’s so much more than just a fried potato sandwich.

Although it’s considered one of the favorite street foods in Mumbai, and you’ll find it throughout the entire city, what’s really interesting is that, unlike other things in India, it’s quite a modern street food snack invention that only dates back to the 1970’s (source).

Located just down the road from Kirti College, and tucked within a very pleasant tree lined neighborhood, Ashok Vada Pav is a hotspot for vada pav lovers in Mumbai.

The owner of Ashok Vada Pav, Mr. Ashok Thakur, who is credited with inventing vada pav, is a culinary hero to many who love to eat vada pav… and after you try the vada pav here, he’ll be your hero too.

Along the road, right outside the gate of an apartment complex, you’ll see a crowd of people standing around, what’s little more than a permanent little stall with a tarp over it and a bar counter for serving.

The vada pav magic all happens in the back of the stall where you’ll see a couple pans of bubbling oil.

A mixture of mashed potatoes and seasonings are formed into burger shapes, dipped into a gram flour, deep fried to a light golden crisp, stuffed into a fluffy bun, seasoned with chutneys, and sprinkled with a generous amount of gram flour crispies.

When you order, in a few moments, your vada pav is slopped on the bar counter and you grab and go, or just stand around and eat.

The first thing that struck me was just how beautiful this vada pav was.

Those colors, and contrast of the golden crispy bits and the green chutney, and overflowing on a little paper plate.

I just loved how it was thrown together so quickly, yet so artfully.

Taking a bite of this vada pav at Ashok Vada Pav, was a moment of vegetarian glory.

At first my teeth sunk into the soft and fluffy bun, followed by the crispy batter fried cutlet, but the potato inside was so silky smooth it almost reminded me of avocado.

Then came the blast of spice from the seasoning and especially the mighty chutney (vada pav wouldn’t be anything without the chutney).

There were a couple of different chutney’s involved in this vada pav. One was more of a chili based chutney I believe, while the green chutney was more of an herb minty and gingery refreshing chutney.

To appreciate the interiors of this vegetarian burger delight, you need to get an even closer look at the insides.

Look at all that flavor packed into that bun – it was remarkable!

At Ashok Vada Pav they also had a bowl of fried salted chilies on the counter for self service. I grabbed a couple, and wished I would have grabbed a few more. They were excellent, spicy and salty, and blistered from being fried.

The final thing I will say is that it was a little on the salty side… and although that added to why it was so irresistibly good, by the time I had devoured the entire thing, I could feel that saltiness coating my mouth.

Perhaps just a little less salty and it would have been even better, but I am not complaining.

When you’re in Mumbai, there are many delicious foods to eat like Bombay duck and Parsi food, but one of the top street foods you have to try is vada pav.

Vada pav is one of Mumbai’s most popular and widely available snacks, a bun stuffed with a fried potato patty, and doused in chutney. It’s not only filling, but it can be extremely tasty.

For one of the best vada pav’s in Mumbai, Ashok Vada Pav is the place to go. What I love so much about their vada pav is the combination of chutneys which make each bite of vegetarian sandwich explode with flavor.

Address: Kashinath Dhuru Marg, Dadar, Mumbai (near Kriti College, Dadar)
Open hours: 11 am – 9:30 pm on Monday – Saturday (closed on Sunday)
Price: 20 INR
How to get there: I took a taxi to get there, and the taxi driver knew exactly where it was – he must have been a vada pav lover! Probably the easiest way to get there is by taxi.

I visited Mumbai on my Round The World Trip for Food with Star Alliance. 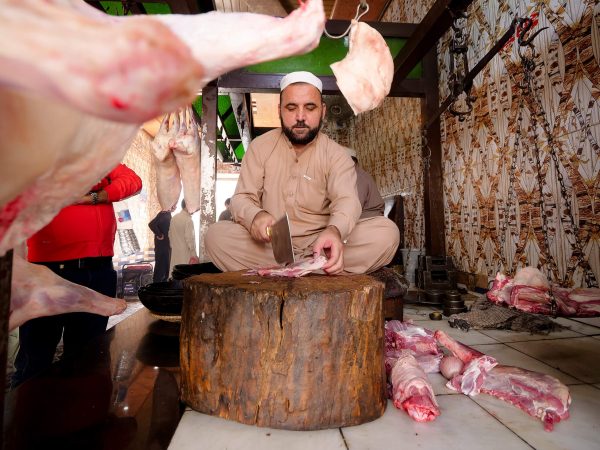